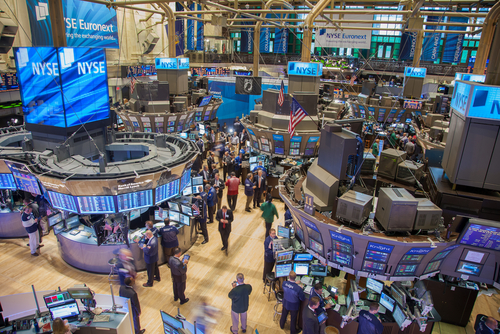 Aussie shares erased the last of their gains for the week as risk aversion gripped regional markets ahead of tonight’s US jobs report.

day of falls saw the ASX 200 drop 59 points or 0.9 by the middle of the session, plunging the index into the red for the week. A week that began with three straight advances looked set to end with a whimper as traders locked in profits ahead of two potential market-moving events in the US tonight: monthly jobs data and another day of negotiations with China over trade.

Overnight, Wall Street closed mixed and off session lows after President Donald Trump said a trade deal could be announced within four weeks. The S&P 500 added 0.21 and the Dow a more robust 0.64 .

The Nasdaq trimmed its loss to less than 0.1 . Here, the tech sector took the biggest hit, falling 2.2 as high-flying technology leaders gave up some of their recent gains.

The sector gave up 1.2 and consumer staples 1.7 . All four big banks lost ground, with NAB the worst of the bunch with a decline of 1.6 to a two-week low.

Japan’s Nikkei edged up 0.2 . Meanwhile, US stock futures reversed early losses after Chinese President Xi Jinping said there had been substantial progress in trade talks. S&P 500 futures were lately up two and a half points or 0.1 . Crude oil futures retreated overnight in the US and were lately sitting near steady at $US62.07 a barrel.

Looking ahead to tonight, while it is all about jobs and trade in the US, across the Atlantic European finance ministers are due to meet in Brussels to discuss a range of issues, including Brexit.