Aussie wages remain sluggish with a tepid increase of 0.5 per cent 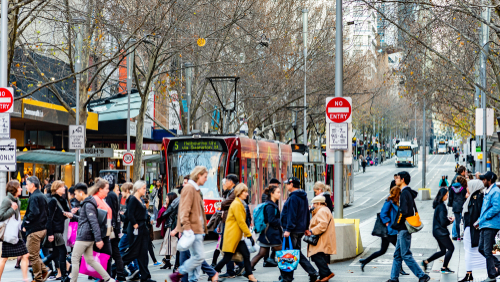 The ASX 200 bounced 33 points or 0.5 per cent to 6273 as calm returned to global markets. U.S. stocks rose overnight after the U.S. President dismissed his trade dispute with China as “a little squabble”. That helped stocks here reverse more than half of yesterday’s heavy fall.

Gains accelerated after quarterly wages data came in weaker than expected, bolstering the case for lower rates. Wages increased a tepid 0.5 per cent over the first three months of the year, according to the ABS – just below the 0.6 per cent predicted by economists. Today’s release was seen as particularly significant after the Reserve Bank announced last week that changes in the labour market will have a big influence on future interest rate decisions.

Technology was the pick of the sectors, rising 1.4 per cent as Altium added 4.5 per cent, Nanosonics 3.7 per cent and Wisetech 2.3 per cent.

Energy was the other standout, rising 1.1 per cent after oil was boosted by attacks on two Saudi pumping stations. Texas crude futures rallied 74 cents or 1.2 per cent to $US61.78 a barrel. That helped lift Santos 1.9 per cent, Oil Search 1.4 per cent and Woodside 1 per cent.

Exclipx Group jumped 7.2 per cent on reports of buyer interest in its Grays Online business. Shares in the fleet manager hit an all-time low in March following a disastrous trading update.

Among the majors, BHP lifted 1.4 per cent and Rio Tinto 1.6 per cent. The banks were all higher, with ANZ the best of the bunch with a rise of 0.5 per cent.

The small end of the market outperformed the big end, in another sign of improvement in risk appetite. The Small Ords put on 0.8 per cent.

At the speculative end, this morning’s standout was a mobile content provider called Crowd Media, whose shares briefly tripled after the company announced digital marketing deals with several global brands. Shares were lately up 2.4 cents or 150 per cent at 4 cents after peaking at 5.1 cents.

U.S. stock futures remained cautiously optimistic after last night’s rebound. The S&P 500 put on 0.8 per cent overnight. This morning S&P 500 futures were recently ahead two points or 0.1 per cent.

On currency markets, the dollar was buying 69.27 US cents.