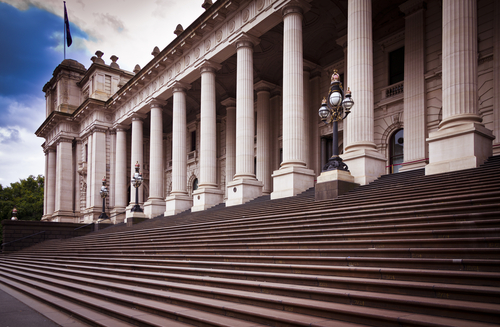 The ASX 200 surged 71 points in early trade to the index’s highest point since January 2008 before easing to a mid-session gain of 44 points or 0.7 per cent at 6371. There was little evidence of pre-election jitters as rises in resource, health and technology stocks propelled the market towards a third straight advance.

A five-year peak in iron ore helped push BHP up 1.9 per cent, Rio Tinto 2 per cent and Fortescue Metals 5.4 per cent to a decade high. Overnight, iron ore futures climbed 2.3 per cent to $US99.21 a tonne on news of record Chinese steel output last month.

The technology sector – a barometer for market sentiment this year – rallied 2.4 per cent to its strongest level since the turn-of-the-century dot-com crash. Bravura Solutions put on 5.2 per cent, Appen 5.1 per cent, Wisetech 4.8 per cent and Afterpay 4.3 per cent.

Health stocks were also strong. Cochlear added 2.4 per cent and CSL 1.8 per cent.

Gold stocks were also weak as the dollar wallowed near three-year lows. St Barbara dived 11.8 per cent after completing a heavily-discounted institutional placement. Regis Resources eased 1.2 per cent and Resolute Mining 1.1 per cent. On currency markets, the dollar was buying 68.9 US cents, pressured by uncertainty over the election and the outlook for Chinese demand as the U.S.-China trade war drags on.

A profit warning from Virgin Australia weighed on airline stocks. Shares in Virgin fell 5.4 per cent after the airline warned weak demand would drag its full-year earnings down by at least $100 million compared to last year. Rival Qantas lost 1.5 per cent.

At the speculative end of the market, shares in battery maker Redflow jumped 2.1 cents or 54 per cent to 6 cents after signing a deal with a Chinese partner for a demonstration project in China. Redflow hopes the collaboration will be a springboard to other commercial opportunities in the vast Chinese market.

U.S. stocks rose overnight as upbeat earnings and economic data overshadowed concerns about trade tensions with China. The S&P 500 put on 0.89 per cent.
Turning to commodity markets, Texas crude futures improved 42 cents or 0.7 per cent this morning to $US63.29 a barrel. Improved risk appetite undermined gold.