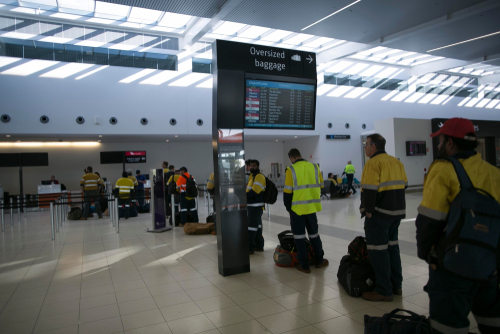 Aussie shares slumped to a one-month low as a cyclone closed iron ore operations and fears of a global recession sent a chill through Wall Street.

The ASX 200 dived 76 points or 1.2 per cent to 6120, a level last seen in late February. Pilbara iron ore miners BHP and Rio Tinto fell after suspending operations ahead of the arrival of Cyclone Veronica on the north-west coast of WA. BHP shed 1.8 per cent after sending home port and rail workers at Port Hedland. Rio lost 1.5 per cent after stopping work at several facilities in the region, including Dampier and Cape Lambert.

The rest of the market faced heavy winds from overseas after a major downturn on Wall Street on Friday. The S&P 500 plunged 1.9 per cent and the Nasdaq 2.5 per cent after a round of soft economic data helped trigger a closely-watched ‘sell’ signal on bond markets. Equity traders abandoned ship after bond markets produced the first ‘yield curve inversion’ since the GFC. An inversion – where the spread between a three-month US treasury and a ten-year treasury turns negative – is seen by many market-watchers as a reliable signal that an economic recession will follow within eighteen months.

Asian investors hit the sell button this morning. Japan’s Nikkei dropped 3.1 per cent, China’s Shanghai Composite 1.4 per cent and Hong Kong’s Hang Seng 1.9 per cent. US futures dampened hopes of a rebound tonight. S&P 500 futures were recently down 11 points or 0.4 per cent.

There were few refuges on the local market. Most of the top gainers on the ASX 200 were gold miners as the gold sector – a traditional haven in times of market panic – rallied 1.8 per cent. Newcrest edged up 2.6 per cent, Resolute Mining 2.1 per cent, Saint Barbara 1.8 per cent and Evolution Mining 1.8 per cent.

Elsewhere it was all red, with this year’s best performers taking the biggest hits. The I.T. sector, which last week closed at its highest point since the heady days of the first dot.com boom, sagged 3.3 per cent as traders took profits in the likes of Altium, down 7.2 per cent, and Appen, down 4.4 per cent. The energy sector, another strong performer this year as crude oil pushed back through $US60 a barrel last week, declined 3.2 per cent.

The financial sector dipped 1.5 per cent to a five-week low. ANZ was the worst of the big four with a fall of 2.4 per cent to its lowest point since early February. CBA shed 1.3 per cent, WBC 1.7 per cent and NAB 1.1 per cent.

On commodity markets, crude oil extended Friday’s sell-off. West Texas Intermediate futures gave up 58 cents or 1 per cent this morning at $US58.48 a barrel. Gold futures consolidated Friday’s gains, lately ahead $1.70 or 0.1 per cent to $US1,314 an ounce. The dollar was buying 70.71 US cents.

The economic calendar is thin this week – perhaps not a bad thing when data is running weak. Germany releases a closely-watched measure of business conditions tonight. Wall Street has nothing else of note to get its teeth into tonight, but may take comfort from the fact the long-awaited Mueller report released this morning did not find evidence that Donald Trump colluded with Russia to win the presidency or obstructed justice.