Biden meets with his “pal” Morrison in New York

President Biden has affirmed the US has “no closer ally than Australia” in a meeting with the Australian Prime Minister he referred to as “that fella down under” last week. 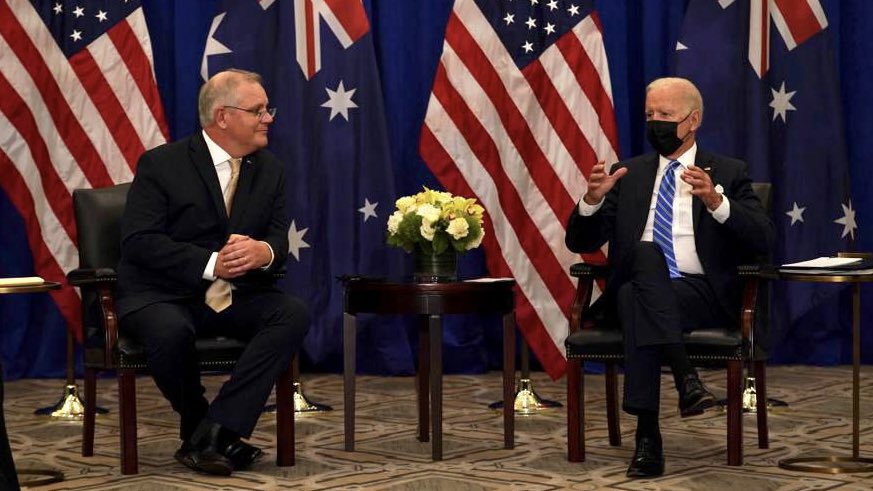 President Biden has affirmed the US has “no closer ally than Australia” in a meeting with the Australian Prime Minister Scott Morrison.

The pair met alongside a summit in New York, where the President made his United Nations debut, with each leader making a point to emphasise the importance of their relationship.

“Our nations have stood together for a long, long time. And we can rely on one another and that’s really reassuring. We’re grateful that our partnership has accomplished what we’ve accomplished together over 70 years” Mr Biden said, referring to the Pacific security treaty ANZUS signed by Australia, the US and New Zealand in 1951.

The comments follow Mr Biden referring to Mr Morrison as his “pal” and “that fella down under” at the announcement of the AUKUS agreement last week.

Also high on the agenda for the bilateral meeting according to the President was the security partnership in the Indo-Pacific region, a conversation that would be furthered with Japan and India.

Last week Australia, the UK and US announced a deepened security pact – AUKUS – with the mission to “protect shared values and promote security and prosperity in the Indo-Pacific region” according to the Prime Minister’s office.

The first initiative under the alliance for Australia to acquire nuclear-powered submarines ruffled diplomatic feathers around the world, including with many nations in the Asia-Pacific region.

Speaking in New York, the Prime Minister said the US-Australia relationship was grounded in support of a “world order that favours freedom”.