Border fight heats up in Australia, as WHO urges caution 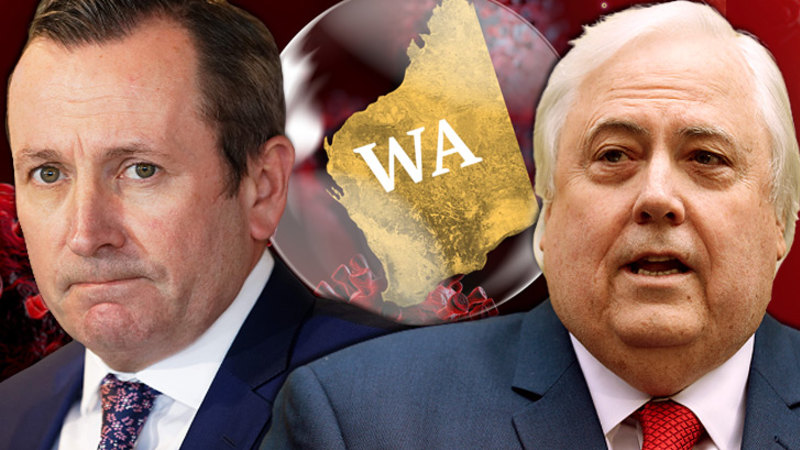 WA is fighting to keep its border closures in place, as Victoria's COVID-19 cases skyrocket and the World Health Organisation urges caution in re-opening borders without considering the effect on public health.

At the heart of the WA's border closure stoush is billionaire and former politician Clive Palmer.

WA has had a strict border closure in place since the start of the pandemic in March and since then it has only grown more strict, with some Perth residents even denied access back to their homes after travelling to COVID-19 hot-spots.

The tough closures have been labelled "damaging", "unconstitutional" and "act of stupidity" by Palmer, who wants to be able to attend business meetings in Perth.

The WA Government would destroy the livelihoods of hundreds of thousands of people for decades by continuing to ignore expert advice and keep its borders closed.

However, the wider WA community appears to disagree with Palmer's assessment, with Premier Mark McGowan enjoying widespread support for his approach to COVID-19.

A survey in late April showed 91 per cent of West Australians supported the Premier's handling of the pandemic.

That number has crept even higher since then.

96% of West Australians want the hard border to stay in place, according to a new poll. @sunriseon7 pic.twitter.com/wLpgv96Yc3

This is due to WA's relatively quick recovery from the coronavirus, with only nine deaths recorded across the state and 665 cases in total.

While businesses have been able to gradually re-open across WA since May, with almost all lockdown restrictions now completely lifted.

Comparatively, Victoria has recorded eight deaths in the last 24 hours alone while more than 10,000 cases have been recorded in total.

Despite the border closures proving effective for WA, the Prime Minister has ordered they be lowered, with the Commonwealth joining Clive Palmer's court challenge.

Scott Morrison has long argued against WA's "all or nothing" border closure approach. He said it wasn't sustainable in the long term and the state needed to open its borders back-up.

"The constitution doesn’t provide for unilateral decisions to close borders without there being a proper basis for those decisions. That is our understanding," the PM said.

The Prime Minister also warned the State Government that it needed to come up with another plan to protect the state from COVID-19, as it was likely to lose its court battle.

WA Premier, Mark McGowan, is standing firm though, in his decision to keep the state shut to all other states and territories.

"Victoria has a diabolical and tragic situation on its hands," he said.

"We do not want that to come in here. We're doing everything we can to prevent that from coming in here," he added.

The border closure court case is currently being heard in Federal Court and will wrap up this week, before heading to the High Court where a final decision is expected by September.

The legal stoush between WA, Palmer and the Federal Government comes as the World Health Organisation (WHO) issued a new travel guidance policy.

WHO is now urging public health to be considered before international borders are re-opened.

In particular, it argues a thorough risk assessment should be completed assessing a nation's capacity to deal with increased COVID-19 cases before travel is allowed to resume.

The organisation had previously said travel bans weren't sustainable in the long-term, instead urging people to change their behaviour and practice social distancing and wearing masks in public.