Crown Resorts, surges 20.6 per cent on interest from Wynn 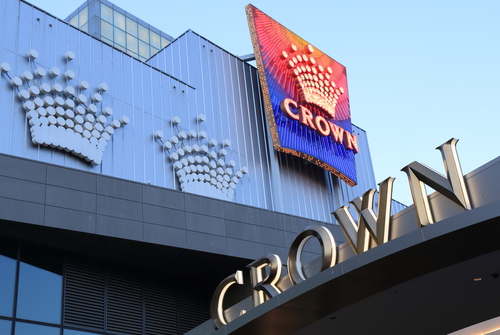 Aussie shares marked time as crude oil hit a five-month high and several big banks touched their lowest point since the end of the Royal Commission.

The ASX 200 struggled for direction following a mixed close on Wall Street, lately trading two points or less than 0.1 ahead at 6223. The energy sector enjoyed another strong session, rising 1.6 after trouble in Libya helped push US crude closer to $US65 a barrel overnight.

Oil has risen for six straight sessions amid signs that a full-blown civil war could break out. West Texas Intermediate crude futures were lately up another 11 cents or 0.2 at $US64.51 a barrel after earlier touching a five-month peak.

Santos led the energy rally here, rising 3.1 after announcing seven new gas-producing wells in the Cooper . Woodside put on 2.6 and Oil Search 2.1 . Yield stocks were the biggest drag on the index, with the banks a significant headwind for a second day as analysts questioned their profit prospects if the Reserve Bank cuts its key lending rate this year, as expected.

CBA, Westpac ANZ all touched their weakest level since the Royal Commission into finance wrapped up in the first week of February. CBA and ANZ eased 0.7 and Westpac 0.4 . NAB dropped 0.6 to a six-week low. The utilities and consumer staples sectors both 0.4 .

The day’s standout performer was James Packer’s casino group, Crown Resorts, which surged 20.6 to $14.16 on takeover interest from American giant Wynn Resorts. Crown confirmed it was in confidential discussions with Wynn over a cash-and-shares offer valuing the company at $14.75 per share, but warned the board has yet to meet to consider the proposal and there was no certainty that a transaction would result. Tech stocks continued to outperform the broader market.

Appen put on 3.9 after completing a successful share issue to fund its purchase of American firm Figure Eight Technologies. Altium added 2.7 and Smartgroup Corporation 2.4 . US stocks took a breather overnight ahead of the start of what is expected to be a soft quarterly earnings season.

While the three major share indices are near record levels, Wall Street analysts have warned that company earnings could fall as much as 4 as the trade war with China and weak European demand take their toll.

Gold futures advanced $1.40 or 0.1 to $US1,303.30 an ounce. On currency the dollar was buying 71.2 US cents. Looking ahead, the slow start to the week continues with only a couple of second-tier economic reports due tonight in the US: job openings and consumer confidence.

Consumer sentiment is also on the menu here tomorrow, as well as a speech in Adelaide by RBA Assistant Governor Guy Debelle.