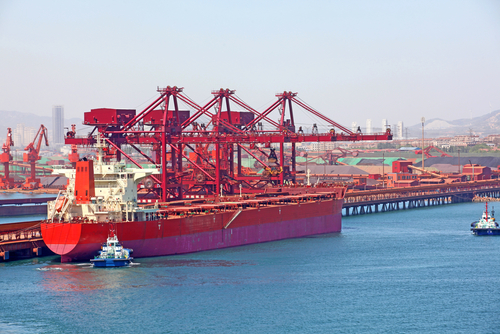 Surging iron ore prices and a rebound in the big banks helped the ASX advance for the first in four sessions.

The benchmark index, the ASX 200, rallied 37 points or 0.6 per cent to 6489 as investors took advantage of a lull in trade tensions as U.S. and U.K. markets shut up shop overnight for public holidays.

A positive morning for most sectors saw tech and resource stocks advance for a second day and the big banks add weight to the rally.

Rio Tinto surged 2 per cent to a post-GFC high after iron ore hit a five-year peak overnight. The spot price for iron ore jumped 3.1 per cent to $US108.62 a tonne, a level last seen in April 2014. BHP gained 1.7 per cent and Fortescue 1.4 per cent. The sharp rise in iron ore prices this year has been fuelled by record Chinese steel production and by a supply shortage after Brazilian exporter Vale suspended ore exports from key sites. Strong demand plus weak supply equals higher prices. Ore stockpiles at Chinese ports last week reportedly fell to their weakest level in more than two years.

The tech sector has been skittish lately, reflecting uncertainty on global markets as hopes of a quick end to Donald Trump’s trade ware dissipated. Language data specialist Appen hit a record high yesterday and extended those gains today with a rise of 3.9 per cent. Technology One added 4.2 per cent, Xero 2.1 per cent and Afterpay 2.1 per cent.

The financial sector had substantial gains to digest following the Coalition’s surprise election win, and this morning resumed its advance. CBA and ANZ both rose 0.8 per cent and NAB 1.1 per cent. Westpac was flat.

Lower down the food chain, analyst recommendations had an impact. Domino’s Pizza fell 5.2 per cent to a four-year low after Morgan Stanley cut their rating to “equal weight” from “overweight”, citing a weaker growth outlook. Mapping tech-maker Nearmap jumped 6.5 per cent after Citi Research initiated coverage with a “Buy” recommendation.

At the speculative end of the market, drug developer Invion almost doubled in value after announcing positive outcomes from testing a cancer product on animals. Shares in the company rose from 1.4 cents as high as 2.6 cents before lately trading 35.7 per cent ahead at 1.9 cents.

Asian markets recorded modest gains ahead of the resumption of trade on Wall Street tonight. China’s Shanghai Composite edged up 0.5 per cent, Hong Kong’s Hang Seng 0.2 per cent and Japan’s Nikkei 0.4 per cent. S&P 500 futures were recently ahead 5.5 points or 0.2 per cent.

On currency markets, the dollar was buying 69.2 US cents.