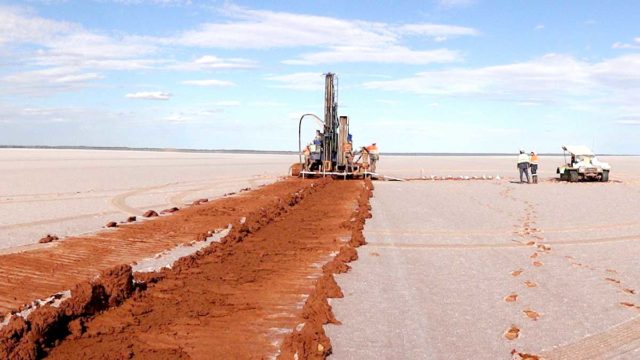 Lefroy Exploration has announced its partner; Gold Fields has good drill results from an drilling program at Lake Lefroy.

Starting out in late January 2019, this project is part of a $25 million Farm-In and Joint Venture agreement between Lefroy and Goldfields. The drilling program was conducted at Lefroy’s Western Lefroy tenements which cover 372 square kilometres.

The aircore drilling program involves completing 350 vertical holes which are spaced 200 metres apart on traverses one kilometre apart to cover most of the tenure in Lake Lefroy using a specialised lake drilling rig.

So far, 329 vertical air core holes totalling 16,929 metres have been completed and assay results have been received and validated for 273 holes in total. The initial 132 holes were reported in mid-April and the latest results, dated on the 30 April 2019, refer to the additional 141 holes. The results are considered to be significant.

The best result from the recent program is six metres at 0.92 grams per tonne of gold from 80 metres in KD81318, located approximately 2000 metres south of the LLT06 prospect. The intersection likely represents gold within transported gravels and sands derived from a primary bedrock source.

A strong, shallow bedrock gold intersection of 10 metres at 0.32 grams per tonne of gold from 24 metres in KD81334 shows a developing gold trend over 3000 metres to the north west of the LLT06 prospect. The intersection is considered very encouraging.

Other encouraging factors are the additional gold intersections at the Zanex Prospect which is near the Woolibar, Speedway and Boulder Lefroy faults – all of which have a primary influence on gold deposits at the St Ives gold camp.

The aircore drilling program at Lake Lefroy will continue through the 2019 second quarter with monthly drill data exports provided.