Macquarie share price ​down 5.7 per cent despite reporting $3B yearly 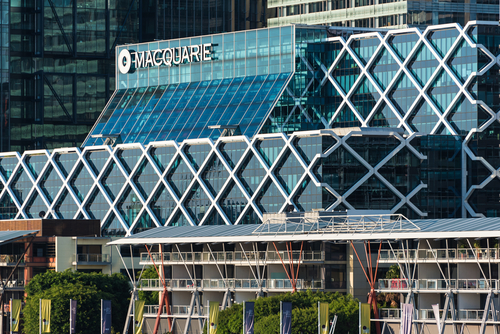 The share market drifted towards its first weekly loss since March as a dour outlook from Macquarie Group weighed on buying interest.

The ASX 200’s four-week winning run looked set to end as the index struggled to make up losses on Monday, Tuesday and yesterday. The index briefly turned negative this morning before rebounding to a mid-session gain of ten points or 0.2 per cent at 6348. A close around those levels would represent a weekly loss of almost 40 points.

The early pressure followed downbeat earnings reports from Macquarie and asset manager Janus Henderson. Macquarie announced a record full-year profit of almost $3 billion, but investors were spooked by guidance that next year’s profit may be “slightly down” on this year. Shareholders want growth and they responded by sending the share price down 5.7 per cent.

Janus Henderson lacks the profile and index weighting of Macquarie but continued this week’s run of disappointing updates from the financial sector. The company was the worst performer on the index today, falling 10.9 per cent after revealing first-quarter net income declined 43 per cent on the same period last year and 13.5 per cent on the final quarter of last year.

Oil companies were the other major drag on the market after crude skidded almost three per cent overnight to its lowest close in a month. Texas crude futures slumped $1.79 or 2.8 per cent to $US61.81 a barrel following news of a sharp increase in U.S. stockpiles. That fed declines here of 2.4 per cent in Beach Energy, 1.5 per cent in Santos and 0.8 per cent in Woodside.

Defensive sectors soaked up some of the funds exiting energy and financials. The consumer staples sector rallied 0.9 per cent as Woolworths hit a four-year high. Earlier this week the supermarket giant announced a 4.2 per cent increase in third-quarter sales.

Medical company Resmed surged 8.5 per cent after boosting first-quarter profits by 15 per cent from the same period last year. Wesfarmers had a six-month closing high in its sights, rising 1.9 per cent as investors reassessed yesterday’s takeover offer for lithium miner Kidman Resources.

Overnight, U.S. stocks closed lower for a second session as investors continued to pout over the Federal Reserve’s reluctance to cut rates. The S&P 500 finished 0.21 per cent weaker. Index futures were this morning ahead three points or 0.1 per cent.

Looking ahead to tonight, the quarterly earnings season in the US is winding down, which means the spotlight should swing back to macro-economic matters. Tonight brings the monthly US employment report and a measure of activity in the services industry.