Gorgeous though the old Volvo P1800 may be, it’s unlikely to offer… 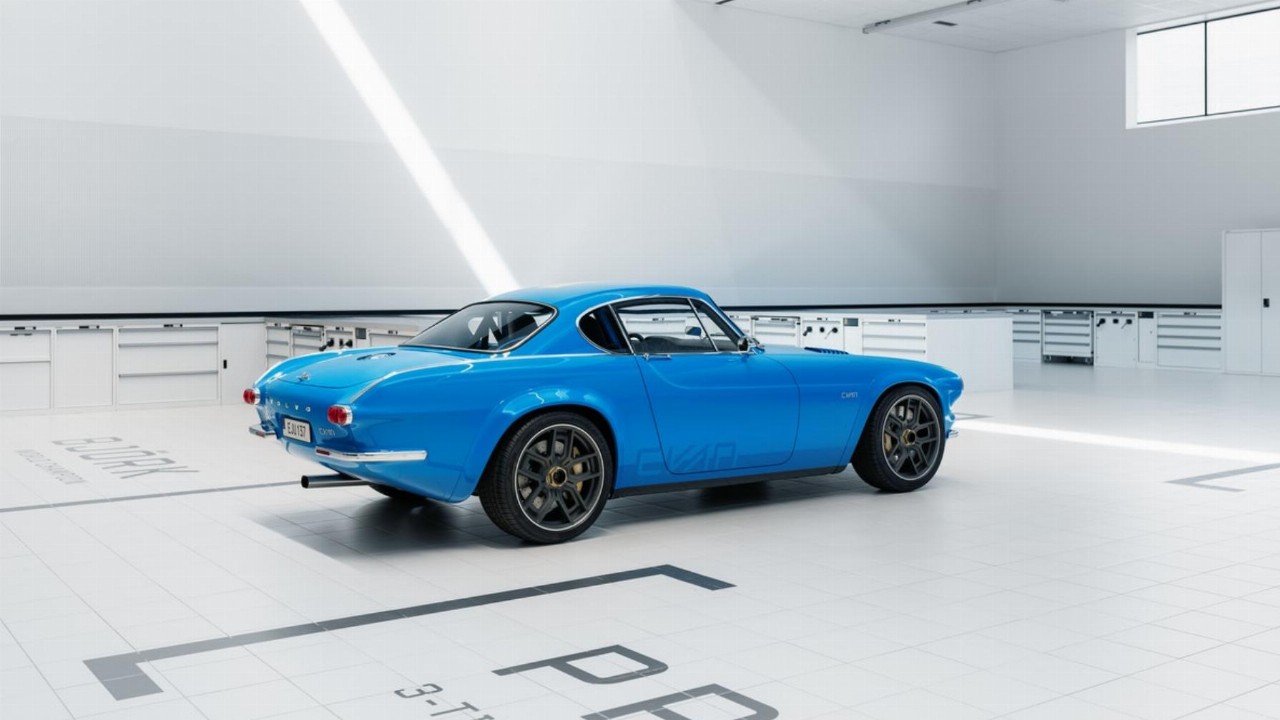 Gorgeous though the old Volvo P1800 may be, it’s unlikely to offer a particularly thrilling driving experience in the current times. We are, after all, talking about a near-60-year-old car, the most powerful version of which produced 130bhp.

But for anyone (with buckets of spare cash) wanting those looks with more dramatic performance, Cyan Racing has an answer. Cyan Racing has completely reworked the gorgeous 60s coupe into a pared-back sports car weapon.

If you’re not sure you’ve heard of Cyan Racing, located in Mölndal, just south of Gothenburg in Sweden, perhaps you’ve heard of Polestar. That was the race team and tuner which did amazing things with Volvos and Volvo eventually bought the name from it.

Still independent and now renamed Cyan Racing (because of the colour), the team is the official motorsport partner for Geely (Volvo’s owner) which has won the 2017 World Touring Car Championship with a Volvo S60 and the past two World Touring Car Cups for Lynk&Co.

While creating the Volvo P1800 Cyan, the team behind it decided to treat the design and engineering of the sixties with care, moving it forward in a delicate way.

The Volvo P1800 body has a significantly redesigned carbon fibre bodywork allowing for a wider track, bigger wheels, a repositioned greenhouse and more. Weak points in the structure have been strengthened with additional steel and yet more carbon.

The two-liter turbocharged four-cylinder engine is based on the same engine as used in the world title-winning Volvo S60 TC1 race car, producing 420 horsepower and 455Nm of torque, with a redline at 7700 rpm.

Drive goes through a dog-leg five-speed manual gearbox sourced from Holinger in Australia (one of the finest decisions made in decades in the driver’s car realm, as we’ll come back to) to the rear wheels via a limited-slip differential. Suspension is by double wishbones all around. There is no anti-lock braking, no traction control and no assistance for the brakes at all, although there is power-assisted steering.

The interior is, just like the exterior of the car, a delicate interpretation of the original Volvo P1800 of the sixties. The interior features a leather clad titanium roll hoop, racing seats, racing harnesses and bespoke digital instruments with a clear link to its original design

"We have focused on creating an interior that reflects the car décor of the sixties in a modern version. We have kept the clean and driver-oriented interior of the original car, carefully moving it forward with modern materials and technology," said Ola Granlund, Head of Design at Cyan Racing.

The weight is only 990kg and only 47% of that is on the front but the front tyres are 245/40 R18s. With quick steering and a small but delightful Momo Prototipo steering wheel, the steering was considered too heavy without assistance.

A key part to the engaging rear-wheel drive experience is the torque-biasing limited slip differential. The differential is mounted in a Holinger housing with unique gears in order to combine capable performance on a circuit with civilised behaviour for road use.

18-inch forged wheels live in each of the upsized wheel arches, wearing P Zeroes measuring 235/40 at the front and 265/35 at the rear. Under the new rims you’ll find four-piston calipers squeezing 362mm discs. There’s no ABS or traction control - it’s all on you.

The starting price for the restoration and modification process is $500,000, Cyan says. The company doesn’t have a specific production number targeted, with all cars built on customer request