The Incredibles by Harry Winston

Once owned by the esteemed Rockefeller family, a vibrant 18.03 carat Colombian… 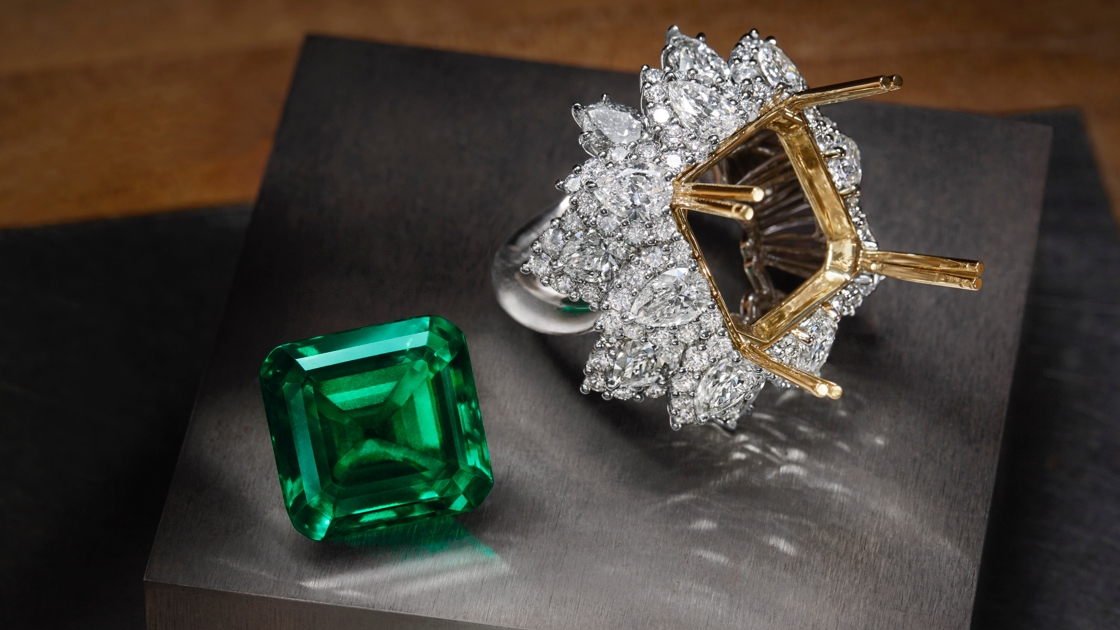 Once owned by the esteemed Rockefeller family, a vibrant 18.03 carat Colombian emerald of impeccable clarity and intense colour joined the House’s peerless selection of jewels.

The emerald was bought by John D. Rockefeller Junior, the only son of the Standard Oil co-founder after whom he was named, in 1930. It was originally set in the centre of an impressive brooch for Rockefeller Jr’s wife, Abby Aldrich Rockefeller.

When she died in 1948 the stones from the brooch were divided between their five children and this emerald was bequeathed to their youngest son, David Rockefeller. When faced with what to do with such a treasured family stone, David turned to the jeweller with whom his father had established a close relationship – Raymond Yard.

Yard set the emerald in a platinum ring, flanked by diamonds, and it has remained in this classic setting until today. Renowned for their exceptional colour and clarity, Colombian emeralds achieve the highest prices in private sales and at auction, and large examples are increasingly rare on the market.

Due to its distinctive colour, the Rockefeller emerald is believed to originate from Colombia. Harry Winston bought the Rockefeller Emerald for a record price per carat at Christie’s New York. The price was $5.5 million, setting a world record of $305,516 per carat for an emerald at auction.

An 18.03-carat emerald-cut Colombian emerald centre stone with 108 round brilliant and pear-shaped diamonds weighing a total of approximately 10.70 carats, set in 18K yellow gold and platinum.

In just a few decades, Paraiba Tourmaline has become one of the sought-after gemstones in the world. With an electric glow that appears to light up the gem from within, the mesmerizing beauty of this 10.31-carat Paraiba Tourmaline is impossible to ignore. The gemstone is accented by 2.70 carats of diamonds and suspended from a chainset with nearly seven-carats of diamonds to create a pendant that is incomparable on many levels.

A magnificent 40.81-carat radiant-cut yellow diamond is suspended from a fully-set diamond necklace that showcases the House’s commitment to putting rare jewels of the world at the forefront of fine jewellery design.

The company is known for its expertise in handling the jewels, which is why yellow diamonds continue to inspire designs today. Much rarer than run-of-the-mill white diamonds, a yellow diamond—first discovered during the late 1860s in South Africa—can fall outside the typical D-to-Z grading range and is, instead, assigned one of six Fancy grades to indicate its colour intensity.

Although scarce, yellow diamonds make up 60 per cent of all fancy coloured diamonds, so they don’t carry the same price premium as pinks or blues. Furthermore, the more nitrogen in the stone’s chemical make-up, the stronger its saturation of the colour, which impacts the yellow diamond’s overall desirability.

The House honours Winston’s outstanding eye for extraordinary stones with this stunning 20.25-carat ruby. Surrounded by round brilliant diamonds, the rich colour of this striking centre stone comes to life.

Harry Winston understood how to maximise the impact of marketing alongside glamour, the company under his direction marked the release of the 50th anniversary of the musical - The Wizard of Oz - with a replica of Dorothy's ruby slippers: initially covered with mere sequins in the original movie.

Winston recreated the slippers setting them with 4,600 real rubies, valued at over US$3 million. They were thought to be the most expensive pair of shoes ever made, and the news reached a world-wide audience. Some of the world's most renowned gemstones featured on and off-screen were owned by Harry Winston, hence his legendary nickname - 'Jeweller to the Stars'.

A 20.25-carat oval-shaped Burmese ruby centre stone with 28 round brilliant diamonds weighing a total of approximately 4.64 carats, set in platinum.