The Latest In Boat Design: This Is The La Spezia

San Lorenzo, one of the world’s biggest yacht builders, has launched the… 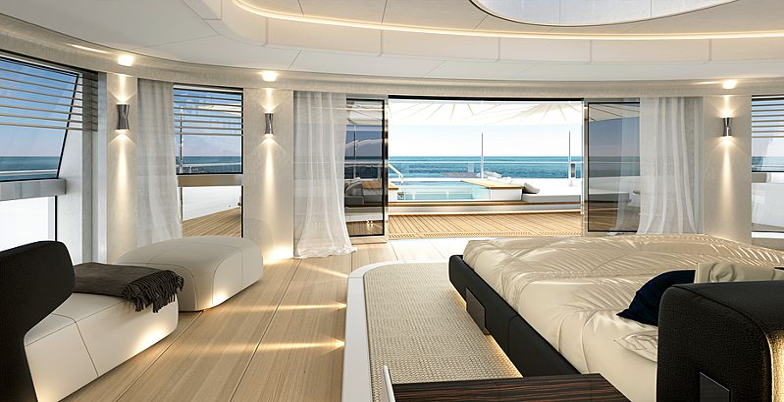 San Lorenzo, one of the world’s biggest yacht builders, has launched the new 62Steel, the first unit in this line, from the company’s shipyard in La Spezia. The 62m motor yacht’s name is Lammouche and she has been built on the same platform as Sanlorenzo's multi-award-winning flagship superyacht Attila.

The launch marks the first of three 62 Steel units sold and under construction. The second hull is slated for delivery in April 2021 and the third at the start of 2023. The model was initially set to debut at the Monaco Yacht Show before the show organizers announced this year's edition would be postponed.

With an overall length of 62 meters, a maximum beam of 11.9, gross tonnage of 1200 and five decks, the new Sanlorenzo 62Steel offers surprising solutions that set new standards in the metal superyacht sector.

The yacht has an elegant, timeless design of poised, harmonious lines, which thanks to the large volumes, innovative layout and advanced technologies guarantees exceptional on-board comfort and livability, as never seen before on models of this size.

Lammouche features an exterior design created by Sanlorenzo with an interior by Francesco Paszkowski. She cruises at 15 knots and reaches a top speed of 17.0 KN.

The spacious owner’s apartment of 210 square metres on the upper deck forward is a real standout feature that covers 97 square metres of interior space. The master suite comes with a palatial bedroom, study, a his-and-hers bathroom layout and a separate walk-in dressing room and leads out directly onto a private 123-square-metre terrace with its one pool and outdoor lounge area.

The 62Steel has been designed by the in-house technical and styling divisions of Sanlorenzo, followed by the contribution of the architects Francesco Paszkowski and Margherita Casprini, who created the interiors of this first unit. Interior layout options include a five or six stateroom arrangement for a total of 12 guests, with 14 permanent crew members housed in separate quarters on the lower deck.

The main dining area also has an indoor/outdoor look, with even wider sliding glass doors that lead out to the rear cockpit. With the doors open, the two areas feel like one huge space, especially since the teak flooring is the same. This interplay of glass and light defines the 62Steel’s interior.

The usually deserted main deck aft space has been designed to house the yacht’s oversized pool finished with a glass-bottom - a feature that has now become standard on all of the yard’s largest superyacht projects. This allows even more light into the beamy beach club below that opens up three ways for a versatile array of layout options. Standard options include a water level lounge area, wellness and fitness centre as well as a bar area.

Other guest features to look forward to including a Jacuzzi plunge pool on the sun deck and a state-of-the-art cinema experience. In addition to the large tenders stored on boars, Lammouche also comes with a touch-and-go helipad on the flush foredeck for easy guest transfers.