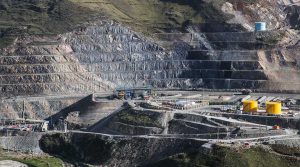 Minerals and Metals Group Limited has provided an update on the Las Bambas mine.

Las Bambas has reached an agreement with the Peru community of Nueva Fuerabamba with the community agreeing to lift the roadblocks at the Yavi Yavi farm and Manatiales near the entrance.

A milestone was reached in 2015, when the first shipment of copper concentrate left Port Matarani in January 2019.

In 2017, 453,749 tonnes of copper was produced at the world’s largest copper mine and it has been increasing steadily ever since.

The district of Challhuahuacho has agreed to conclude it support of the current roadblocks which will be confirmed shortly.

This agreement will enable transport to and from the Las Bambas site in order to restore mining and production.

At the moment, current stockpiles at the site are sitting at 59,000t of contained copper in concentrate. More updates will be provided pending the release of the March Quarter Production Report.

“The primary focus continues to be the safety and security of Las Bambas people and local community members,” MMG stated. After the ratification on 8 April 2019, Las Bambas expects to restore mining, production and concrete transport.