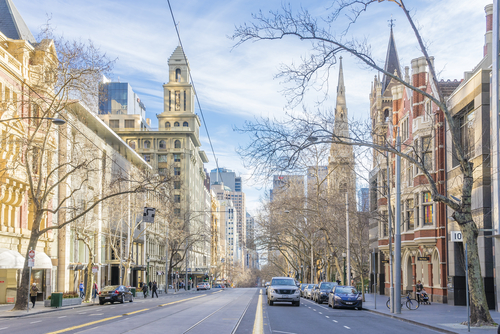 Aussie shares slipped towards a second day of losses as traders resigned themselves to a protracted trade war between the world’s superpowers.

The ASX 200 fell 39 points or 0.6 per cent to 6453 this morning but remained on track to end higher for a second week as gains through to Wednesday outweighed a global downturn that began yesterday.

A chill wind blew through equity and commodity markets overnight as traders abandoned lingering hopes that China and the U.S. will end their damaging trade war any time soon. Leading stock indices in Asia, Europe and the U.S. all declined more than 1 per cent. Crude oil suffered its biggest loss of the year. Iron ore turned lower.

The result here this morning was falls across all sectors except the traditionally defensive gold and health sectors. Energy stocks plunged 3.3 per cent. Overnight, Texas crude futures sagged $3.51 or 5.7 per cent to $US57.91 a barrel as part of a general retreat from risk assets. Here, Beach Energy dropped 4.9 per cent, Santos 4 per cent and Woodside 3.6 per cent.

The I.T. sector is full of growth stocks leveraged to the health of the global economy. This morning the sector shed 2 per cent as Altium lost 4.7 per cent, Afterpay 4.6 per cent and Technology One 3.3 per cent.

The big banks have had a week to remember, thanks to the Coalition election victory and positive signals from the Reserve Bank and the financial regulator. However, they gave back some of their gains this morning, CBA and ANZ falling 0.3 per cent, NAB and Westpac 0.1 per cent.

At the small end of the market, investors were enthused by a progress report from gas junior Leigh Creek. Shares jumped six cents or 27 per cent to 28 cents after the company said its flagship gas project in South Australia had attracted considerable interest from potential customers.

Turning to commodity markets, gold attracted some haven buying but lost momentum this morning. U.S. gold futures were lately down $2.50 or 0.2 per cent to $US1,282.90 an ounce.