The energy sector gained 2 per cent after a U.S. crackdown on Iranian oil 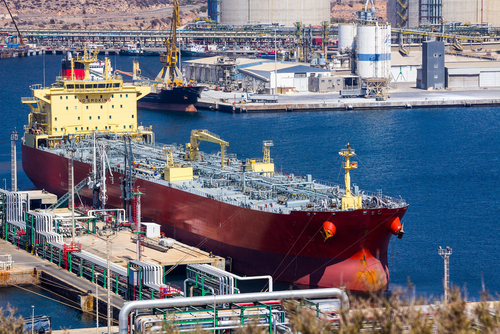 The ASX 200 launched a holiday-shortened week with a jump of 49 points or 0.8 per cent to crack 6300 for the first time since early September. The benchmark index touched 6311 before easing to 6308.

The energy sector surged 2 per cent after a U.S. crackdown on Iranian oil exports lifted crude over the Easter break to its highest point in almost six months. Texas crude futures settled at $US65.70 a barrel overnight as President Donald Trump said the US would end exemptions on eight countries that have waivers to import Iranian crude. That fed gains here for local oilers Santos, up 2.4 per cent, and Woodside and Beach Petroleum, both up 2.3 per cent.

A generally strong morning saw gains across every sector except defensive gold stocks, which eased 1.1 per cent as sector heavyweight Newcrest dipped 1.6 per cent and Northern Star 1.5 per cent.

The I.T sector bounced 1.4 per cent from a two-session setback after last week touching its highest point since the dot.com crash at the turn of the century. Sector leader Appen put on 4.6 per cent, Xero 2.9 per cent and Altium 2 per cent.

Takeover target Automotive Holdings fell 0.4 after the board advised shareholders not to accept a hostile offer from A.P. Eagers. BHP edged up 0.1 despite a broker downgrade from UBS, which questioned whether the share price has further to run following an eight-and-a-half-year peak earlier this month.

Turning to the week ahead, trading volumes are likely to be lower than normal with some traders taking a break ahead of Thursday’s public holiday. The highlight of the domestic economic calendar is tomorrow’s quarterly inflation report, expected to confirm that the Reserve Bank is under no pressure to raise rates. The U.S. releases housing and manufacturing data tonight, but much of the interest is likely to be in earnings updates from the likes of Procter & Gamble, Verizon and Coca-Cola.