Woolworths down 1.1 cents after completing $1.7B buyback 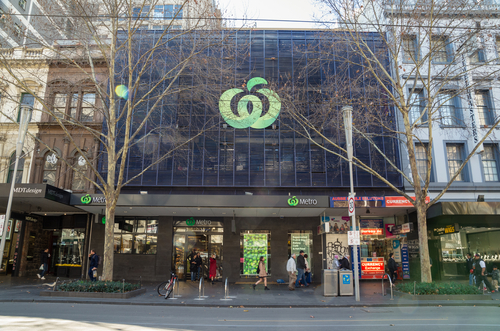 Aussie shares marked time as public holidays tonight in the U.S. and U.K. depressed movement on the global money-go-round.

The ASX 200 eased two points or less than 0.1 per cent to 6454 as gains in resource and technology stocks were outweighed by declines in Woolworths, Telstra and some of the big banks. Buying interest has trended lower since the index hit an 11-year high last Wednesday. This morning the index hovered near break-even in a tight 15-point trading range

A broadly-positive session for commodity prices on Friday helped mining stocks. BHP jumped 1.3 per cent after iron ore ticked up 1.5 per cent and copper 0.5 per cent. Rio Tinto put on 1.8 per cent and Fortescue 2.6 per cent.

Tech leader Appen advanced 4.2 per cent to a record high this morning as the sector rebounded from a bruising week. Wisetech rose 2.8 per cent and Altium 2.4 per cent.

Supermarket Woolworths was one of the biggest drags on the index, falling 1.1 cent after announcing the completion of its off-market buyback. Telstra retreated 1.8 per cent from Friday’s 15-month peak. The banks accounted for the rest of the weakness as the post-election bump continued to fade. CBA shed 0.4 per cent and Westpac 0.6 per cent. ANZ and NAB were flat.

Telecom group Vocus was the index’s best performer after announcing a takeover offer from a Swedish private equity firm. Vocus shares rallied 17.9 per cent to $4.59, well short of the “indicative, non-binding” offer price of $5.25 from EQT Infrastructure. The price gap suggests some investor scepticism over whether a binding offer will eventuate after the Swedish firm has done its due diligence. The indicative offer values the company at $3.3 billion.

Fisher & Paykel Healthcare fell 3.6 per cent despite unveiling a record full-year profit of $NZ209.3 million, a rise of 10 per cent. Investors may have been miffed that the company also announced it was suspending its dividend reinvestment plan after reducing debt below its target range.

The morning’s best performer at the speculative end of the market was a junior mining explorer called Rafaella Resources, which bolted 8.5 cents or 121 per cent to 15.5 cents after signing a deal of buy a Spanish tungsten and tin project. The company plans to fund the purchase with a share offer at 20 cents.

Limited changes on Asian markets this morning ahead of the Memorial Day holiday in the U.S. and the Spring Bank Holiday in the U.K. China’s Shanghai Composite slipped 0.2 per cent and Hong Kong’s Hang Seng 0.5 per cent. Japan’s Nikkei gained 0.3 per cent. S&P 500 futures in the U.S. dipped two points or 0.1 per cent.