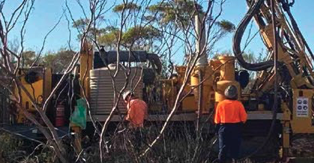 Aldoro Resources (ARN) has defined an initial exploration target within the Niobe Project in Western Australia.

The initial target contains between 33,000 and 150,000 tonnes at grades ranging from 696 to 1457 parts per million (ppm) rubidium oxide over an area bound by 80 metres by 65 metres of detailed drilling. However, the potential quantity and grade is conceptual in nature and is an approximation.

The exploration target was identified over part of the western side of the Niobe Pegmatite One area, which has been re-evaluated for rubidium potential. This follows a review of historical data from drilling in the mid-1980s which returned up to 1.09 per cent rubidium.

Tantalum was also mined in 1996, with 20 tonnes of tantalum heavy mineral concentrate produced from a small shallow pit.

Interestingly, the company noted that the Niobe Project might have some similarities to a major rubidium deposit that was discovered in China’s Guangdong province in 2019.

The Tiantongshan deposit has resources of rubidium dioxide more than 100,000 tonnes at an average grade of 0.109 per cent and is the biggest rubidium deposit in the world.

“It seems that the potential resources of the Niobe rubidium project of Aldoro Resources may be in the same order as the Tiantongshan rubidium deposit with analyses of Rb2O>1.5 per cent, and associated with other valuable elements, such as lithium, caesium and tantalum,” the company stated.

Looking ahead, Aldoro Resources plans to expand the exploration target area encompassing the mapped pegmatite on the western side of Niobe, Niobe East, the Breakaway pegmatites and Niobe South pegmatites.

The company is also waiting for a program of works approval to commence reverse circulation drilling at the end of September.