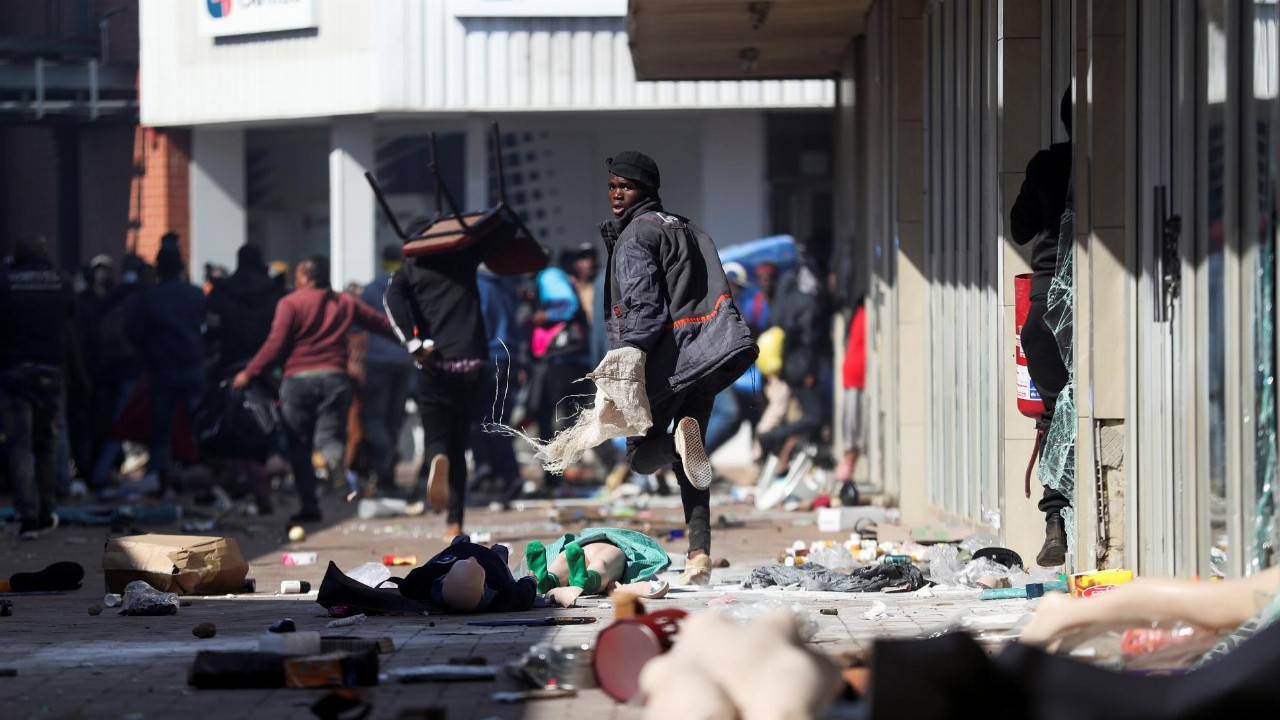 Dozens of people have been killed and hundreds of stores ransacked after riots erupted across South Africa following the jailing of former president Jacob Zuma.

Protests have flared into rioting over the past week as crowds clashed with police, looted stores bare, and set shopping centres on fire. Local authorities said at least 72 people had been killed and more than 1200 arrested since the riots broke out.

The riots started in Mr Zuma’s hometown in KwaZulu-Natal (KZN) but have since reached the province of Gauteng, which is home to Johannesburg, South Africa’s largest city.

It seems the violence was sparked by Mr Zuma’s arrest last week after he was found to be in contempt of court for failing to appear at a corruption inquiry.

South African police and armed forces have been dispatched to quell the riots and looting, though the South African government has stopped short of declaring a national emergency.

Scenes of destruction at the Sam Ntuli Mall in #Katlehong. All shops completely looted out. #ZumaUnrest #zumaprotests #SABCNews pic.twitter.com/qOE6YlWY1z

South African President Cyril Ramaphosa urged rioters on the weekend to stop damaging the economy, saying the impact of public violence caused by the riots would also be felt by the people committing the crimes.

“The Constitution protects the right to protect, but protect cannot be abused to break the law or to destroy property and threaten livelihoods,” President Ramaphosa said.

“Criminal elements must be met with the full might of the law.”

He said later on Twitter that South Africa was emerging from a “long period of uncertainty and stagnation”.

“We have witnessed the effects of corruption and the erosion of the state, the terrible consequences of the abuse of power and neglect of duty,” he said.

President Ramaphosa did not mention Jacob Zuma by name, though those organising the protests have been calling for his release from prison.

Mr Zuma was last month sentenced to 15 months in prison after defying a constitutional court order to give evidence at an inquiry into previous government corruption.

The Judicial Commission of Inquiry into Allegations of State Capture, known as the Zondo Commission, is investigating high-level corruption during Mr Zuma’s nine years in office from 2009 until 2018.

Mr Zuma refused to comply with the court’s orders, hence the prison sentence. He handed himself in to the police and began the prison term last Wednesday.

HoweverMr Zuma denies the corruption charges and has also challenged the 15-month sentence, further fuelling the violence and protests from supporters of the former president.

Mr Zuma was the leader of the African National Congress (ANC) party during his time in office — the same party lead by Nelson Mandela in the 1990s following the fall of apartheid 27 years ago.