The company has drilled the hole to almost 310 metres deep and the hole has encountered broad mineralisation with gold grading up to 56.3g/t.
ASX:FG1      MCAP $9.032M 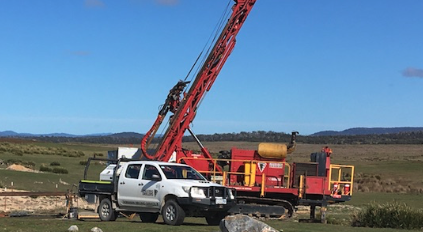 BRDD003 was drilled to confirm results of historical drilling and to provide data regarding the orientation of structures, veining and mineralisation.

The hole was drilled to a 309.8-metre depth and encountered multiple zones of sheeted quartz-arsenopyrite veining with associated gold mineralisation.

The hole also intersected a 38-metre-thick mineralised zone from 111 metres which correlates well with mineralisation 50 metres down-dip in a historical hole. The zone remains open at depth as well as along strike and Flynn believes it represents a priority target that will be followed up.

This drilling forms part of a planned 4100-metre program targeting 250 metres of strike at the Brilliant prospect. Samples from five completed holes are currently at at a lab for assaying and the company is drilling a hole to target high-grade mineralisation along strike from BRDD003.

FG1 by the numbers