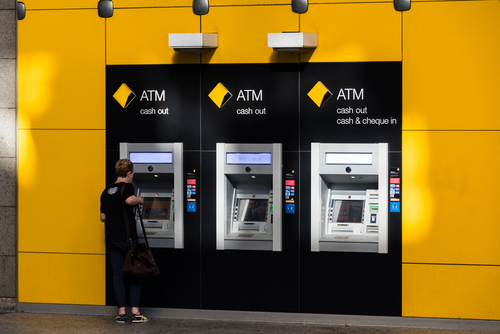 Weakness in the big banks and oil companies saw the Australian share market start the week on the back foot.

Gains in resource stocks failed to offset declines in the banks ahead of a busy week of corporate earnings. ANZ, which is due to report its half-year result on Wednesday, fell 0.6 per cent. NAB, which reports on Thursday, dropped 1.4 per cent. And Macquarie Group declined 0.6 per cent ahead of Friday’s market update. CBA and Westpac both lost 0.9 per cent.

Energy stocks were the other major drag on the index as crude reacted to another intervention by US President Donald Trump. The local energy sector declined 0.5 per cent this morning after Trump told reporters he told OPEC he wanted lower gasoline prices. That helped drag US crude down almost 3 per cent on Friday, a fall that continued this morning. Texas crude was lately down another 20 cents or 0.3 per cent at $US63.09 a barrel. Here, Oil Search shed 1 per cent, Santos 0.7 per cent and Woodside 0.6 per cent.

The overall index loss might have been deeper if not for gains in resource and I.T. stocks. BHP rebounded 0.4 per cent from a one-month low. Resolute Mining added 0.9 per cent after upgrading the resource estimate at its Tabakoroni gold mine in Mali. Afterpay was the best of the tech stocks, rising 4.3 per cent.

The quarterly reporting season produced both winners and losers. Freelancer jumped 17.9 per cent after the outsourcing company said cash receipts increased 16 per cent to a record. Afterpay rival Zip Co surged 8.3 per cent on record revenue as customer penetration reached 1.2 million. At the other end of the market, heavily-shorted miner Syrah Resources dropped 5.9 per cent after revealing it achieved a lower average price for its graphite than it hoped. Pilbara Mining fell 4.6 per cent after Tropical Cyclone Veronica impacted sales.

The market snubbed broadly positive leads from overseas, with Wall Street closing at a record on Friday. The S&P 500 put on 0.47 per cent and closed at an all-time high after strong GDP figures doused fears of a recession. S&P 500 futures were this morning trading flat following a mixed morning in Asia. China’s Shanghai Composite eased 0.8 per cent and Hong Kong’s Hang Seng advanced 0.4 percent. Trade on Japan’s Nikkei was suspended for the next ten days to mark the enthronement of Crown Prince Naruhito.